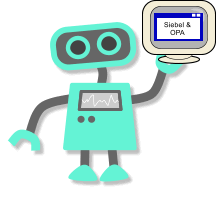 As you may already know, the previous major releases of Siebel Open UI (2015, then enhanced in 2016) introduced the concept of a “seamless” integration with Oracle Policy Automation. It required the following to be configured:

Unfortunately, at the time of the release of this solution, not all Oracle Policy Modeling Interview Controls were supported (notably the Container and the Image Control were missing). Since that time, Oracle Policy Modeling has added further enhancements in both November 2016 and February 2017 releases (lots of new controls, better checkpoints) . The integration with Siebel therefore had lost further ground. It is not surprising therefore to see the proposal of a new solution supporting more features,notably more controls and checkpoints.

I had hoped to provide you with a demonstration, however, the two files linked in the article both respond with 404 errors. I have posted a request to have that seen to, and will report as soon as I can on Siebel integration with Oracle Policy Automation.