Once again we return to the Cars and Mechanics in the mythical Workshop. The first part of this post will review the French version of the work done in the previous episode, and then we will undertake some cross-entity reasoning using the various functions at our disposal. Catch up with the rest of the series (1–2–3–4–5)

The French version looks like this in the Web Determination window. First off, the basic structure is exactly the same and there are no challenges to report. 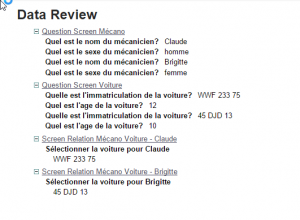 Eagle-eyed viewers will notice there is a problem (that we raised earlier in the context of Gender but now is as good a time as any) concerning the title of the page. In fact, despite the Project being French Language and French Region, all the labels are in English (“Data Review”, “Assessment Summary” etc.). You could be forgiven for thinking these came from the “Appearances Property File” in your Release folder: 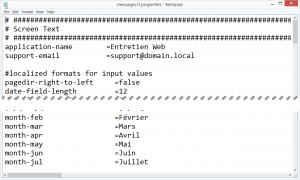 But no. The titles that I just mentioned are generated when you add a Screens File to your Project. So even though we have a French Project with French as the Rule Language, we get English titles!

Irritatingly enough the way to fix this (if it can really be called fixing) is to switch the Language of Policy Modelling to French before you start, in which case when you add a Screens File you will see valid Titles: 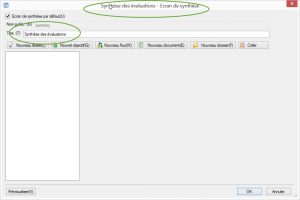 Then you can switch the editing language back to English and at least you have the right titles in your Screens File. (Tools > Options > UI Language). I know it sounds silly but there are many occasions when you want to create a Project in another language but you don’t want Policy Modelling User Interface to be in that Language.

Switching back to the English version of our Project, we can now get into some more Functions, specifically cross-Entity functions. These functions are designed to cope with the need to cross from Car to Mechanic in a rule. For example

Consider the fact that Mechanics exist in several types – Expert, Confirmed and Novice. We want to write rules that say

The Car will be ready on time if the Car’s Mechanic is an Expert.

The Car, the Mechanic – these are our Entities. The Workshop, our “singleton parent Entity” is the standard Global parent Entiity proviided by Policy Automation.

Let’s look at the Function Reference for the For function that will be useful in our case. We are able to reason cross-Entity, as long as the Relationship type is correct (and between Car and Mechanic it is Many-to-One), and there is only one Condition (the Mechanic is an Expert.

Assuming you take a moment to create an Attribute “The Mechanic’s level” of type Text, then you could examine the following from the Function Reference and get writing.

As is often the case, there are long and short versions. There is nothing stopping you using one, or other of these versions as you prefer, interchangeably. But look closely and you will see the definition of the Function has some differences. The short or “terse” version “For (relationship, expression)” looks like this when we write it out: The following should compile.

But suppose you decided to write using the Long form, “in the case of“. The Function Reference gives a slightly different explanation for that version, if you look closely. It says “in the case of relationship, attribute”. Which is not the same thing as the previous example, And indeed, the example below does not compile.

The following example does however, Notice how in this example we have changed the “level” to be a Boolean attribute rather than a Text attribute. It would appear from the Function Reference that the long version is only possible with a Boolean. And that may mean you end up creating an intermediate rule like this:

And that may be something you do not need or wish to do, so you decide to use the terse version. But before you give up on the long version, you see there is a third option in the Function Reference “<val>, in the case of <relationship>”. Interestingy, the “<val>” acronym appears only once on the entire list of Functions. And it is far from clear what it actually means. So best to avoid that.

Next time, we will continue and use some other Functions!