Silent and Invisible : Back to Basics

The other day I was reading Jasmine Lee’s OPA Blog Post (and if ever there was a person who deserved the title of OPA Evangelist, Jasmine fits the bill) about an oft-forgotten feature in the area of substitution – second person substitution. Her article motivated me to write this one, based on a conversation with an OPA person who had clearly forgotten about another “easily forgotten feature” : Silent and Invisible Explanation Options.

One of the “oft forgotten” features of Oracle Policy Automation is the concept of Silent and Invisible in respect of Attributes. You can find it under the “Explanation Options…” button, shown below. 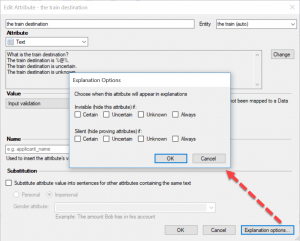 Most people have heard about it at some point,but it is worth reviewing the different ways this can help you. Consider the following one-page example: 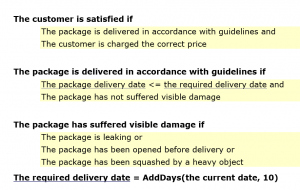 Set the values for the package is delivered in accordance with guidelines to the following in the Explanation Options: 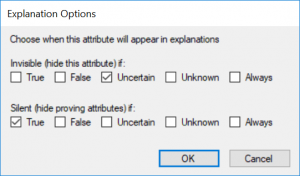 Set up a simple Interview Screen as follows, and enter the data as shown: 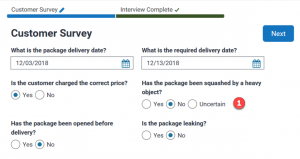 Notice that the heavy object attribute has been made to be never mandatory on the Screen, so that the uncertain option is displayed. Set the values as above, and notice how the Explanation at the end of the Interview is designed. Since there is nothing to report in the matter of delivery guidelines, the silent if true comes in to play and displays this:

Now go back and change the heavy object attribute value to true. Look at the Explanation now:

There is a problem, so the explanation is shown and the user can understand where the problem lay. Now set the value of the heavy object attribute to uncertain. The Explanation shows the following:

You might be surprised by this one, but you shouldn’t be. The delivery in accordance with guidelines attribute is uncertain, because one of the base attributes is uncertain. The invisible setting removes the heavy object attribute since the value is uncertain, which we chose in the Explanation Options dialog. But the intermediate attribute suffered visible damage was not configured for Explanation Options so it does show up. In effect, we have “skipped over” the delivery in accordance with guidelines but the lower level carries on without change.

Of course, there are lots of different combinations but there is even more that this feature can help us with:

Suppose you are looking at the second example in the Debugger (when the customer was satisfied), but you can only see the following in the Show Decision dialog. This is because of the options you set.

Even better, the Form (BI Publisher) component of Oracle Policy Automation is Silent and Invisible-aware as well. Consider the following two PDF outputs:

These were both generated from the same Form template, with the standard Explanation code entered. No need for conditional zones, extra filters or anything. It just works. (You can find out more about how to add an Explanation to your PDF content here).

These are plenty reasons why the Silent and Hidden functionality should be on your list for revisiting!