Following on from the previous post, this short series is looking at temporal reasoning. In the initial post we investigated the basic principle of entering temporal data in the debugger and using a function such as ValueAt() to get the value of a temporal attribute on a given date.

Now that we have laid the groundwork, we can extend our range a little. The first scenario to discover requires us to have the data in the debugger just like last time, with data for the first few days in July. If you are not sure of the scenario then jump right back to chapter one.

When did you last have lots of money in your account?

I’m sure I’m not the only one who sometimes looks at my bank account and feels a little depressed! The bank balance seems to go down and down, then spikes up on pay day and down and down again. I often ask myself, when looking at something nice in a shop or showroom  – a car for example – when did I last have that kind of money?

Thankfully, Oracle Policy Automation is here to help answer that question and many others in relation to temporal data. The following function will hopefully illustrate this example:

You can probably guess the idea. Working backwards from the current date, when did I last have a value greater than 1500 in the temporal bank balance. Now, if you have been using the same example data as me, this function will currently return a value of uncertain. That’s because none of the data in the debugger at the moment is greater than 1500. But if you add a new Change Point to the temporal bank balance, for example : 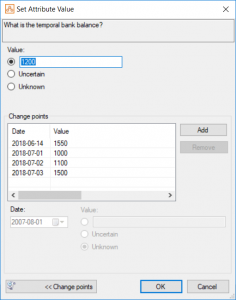 Then your debugger should provide you with a more definite answer. In my case, you can see that June 14 I had a change to my bank balance and it was 1550. The next available change point is July 1, when the value was 1000. So when did I last have more than 1500 in my temporal bank account? Following the change point data, the last date I had that amount of money was June 30. You might suspect that I spent my money faster than that 🙂 but we can only work with the facts, and the change points are those facts.

It won’t come to you as a surprise that there are many functions in the Function Reference for finding out values, and one of them is described below. It belongs to a series of functions prefixed with Interval.

This one, as the goal suggests, helps me find my lowest bank balance in the period between the start of the year and today, based on the information in the change points. It will obviously depend on your data, but you will probably have something like this.

In the next post we will continue investigating members of this family of temporal reasoning functions.