The second post in this series about What’s New in Oracle Policy Automation 18A covers the new administrative features relating to the REST API. As many readers will know, the latest versions of the product all provide a variety of interfaces that can be manipulated either using a traditional programming language (for example, in an earlier post we looked at using Microsoft Visual Studio and the REST API to review information about users, deployments and even to automate the download of a deployment ZIP file as a proof of concept), or other tools as explained below.

It is possible to use more modern tools such as curl command line tool and library to make calls and receive the JSON output. As a last resort or simply for test purposes one can always use SOAP UI. Although (naturally) we think of SOAP UI as a SOAP testing tool, it is equally at home testing REST endpoints. 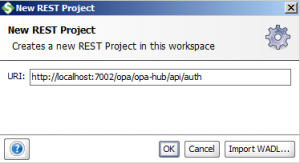 The REST API requires the use of OAuth authentication, so you will need to set up an authentication profile and leverage it to acquire an access token. Once the token is acquired and as long as it has not expired, many calls can be made to the REST API endpoints for example for users, deployments but even (if licensed) the batch engine. 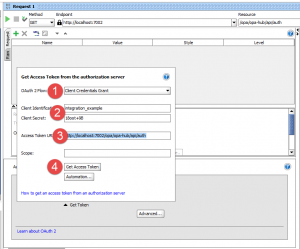 In the above example, the token is being accessed through Client Grant, using an integration user called integration_example. It assumes of course that this user exists on the Oracle Policy Automation Hub and has API access.

As we are discussing  What’s New in Oracle Policy Automation 18A #2, to quote from the official documentation :

As per the explanation above, the /users endpoint now supports not only normal, and API users but also an Identity Cloud Service user. In the example below, an authenticated call is made to the /users endpoint, and in the latest version this supports all the verbs you will need (GET,PUT, POST,PATCH,DELETE) to fully automate the users collection in your environment.